How many Ample employees does it take to stay on a moving vehicle? 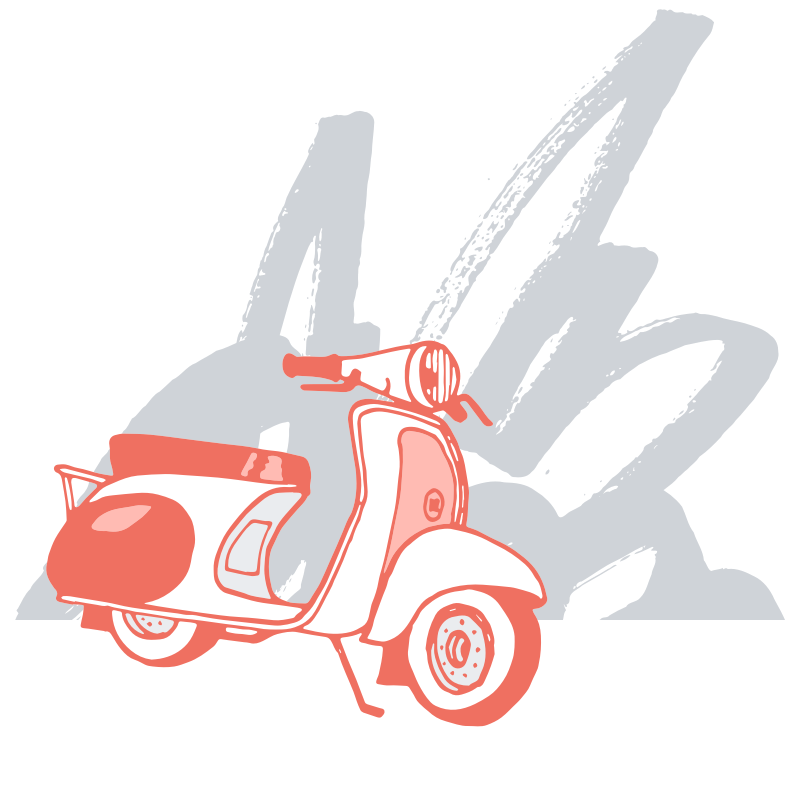 My first day at Ample, I was asked something I hoped and figured would stay hidden from the workplace: “Was that you on the scooter on Barstool’s Instagram?” Indeed it was. My boyfriend and I had our 10 seconds of fame after Barstool Sports and MTV’s Ridiculousness picked up the video of us crashing a Vespa into a parked car. Luckily, this sparked conversation around other people’s tragic Vespa, scooter, and other motorized vehicle stories.

Color me thankful that I was not the only scooter-incompetent person on this Earth, and —  better yet — at this company. I sometimes forget how important a little break up in the work day is, which prompted me to write and share our team’s stories of two-wheeled mishaps — hopefully it’ll bring some humanity to our team and put a smile on your face.

So, see below for the fun and failed tales of Ample’s attempts on all things two-wheeled:

Vehicle used: Dirt Bike
Key piece of advice: “File this under shit you only do once.”

In high school my friends and I would go to our buddy’s farm in Indiana and do stupid stuff — ride dirt bikes, shoot stuff, whatever. I hopped on the back of a 125cc dirt bike.

My buddy, Rusty, was drivin’ and we took off, out of control, headed down a ravine barreling toward a pond. We quickly realized this wasn’t going to end well and decided to “put it down.” We rolled that thing down the hill several times and came to rest in a stinging nettle bush. (Picture the bush on the bottom, then me, then the dirt bike, then 280 lbs. of Rusty.) We were wearing shorts so we both got lit up by the stinging nettle and the piping hot exhaust pipes. My calf still has a nice reminder of this Darwinian moment, almost 30 years later.

Vehicle used: Bicycle
Key piece of advice: “Know your limits and be careful who you show off to. Also? Reserve your inner stupid for alone times.”

I used to ride my bike all the time when I was a younger teen. I had a sweet blue ten speed and learned to ride it all around my neighborhood without hands, steering and everything. The entrance to my neighborhood was located at the bottom of a hill (not a very steep or long hill, either).

Some kids I babysat for lived right at the bottom of the hill. I had taken the turn to the left down the hill hands-free many times. For some reason, I thought that when the kids were in their front yard watching me would be a great time to try to take the hill both hands-and-feet-free. I couldn’t turn going that fast down a hill and ended up flying over the handlebars and scraping up both my knees in the process (and probably some other parts I’ve since forgotten). My bike chain fell off and I had to limp my bike home with blood running down my shins like a dumbass.

Lesson? Know your limits and be careful who you show off to. Also? Reserve your inner stupid for alone times.

Vehicle used: Moped
Key piece of advice: Rent the scooter, take the risk. Do the thing you're afraid of (and maybe not prepared for). But also wear your helmet, those parked cars will get ya. ;)

After graduating college and entering the work world for a year, two of my best friends and I decided to give ourselves a break and have a "spring break" with a cruise to Mexico.

If you have worked with me, you know I can be a bit rambunctious, and, so while at the pool, someone (who was an avid motorcyclist) mentioned that Cozumel was so small you could see the whole island by moped and that was their plan. Of course my friends and I thought this sounded fun, but none of us had ever been on anything with only two wheels other than a bicycle. That was not going to stop me, though. As the pushy friend I am, I forced my friends to rent mopeds (trust me — this took A LOT of pushing).

When we arrived, the very responsible worker asked us to confirm we had ridden a moped or motorcycle before, and I quickly took the lead and assured him we'd be just fine. My friends couldn't believe they actually rented them to us, and they were honestly so terrified they decided to ride on one together. Skip to the end of this story and after one of us (almost) ran right into a parked car pulling out of the very parking lot we just (allegedly) lied in. But it was the best day ever and we still talk about it!

This should cover it.

So, from what you’ve read you’ve likely picked up that Ample employees don’t excel in their use of two-wheeled vehicles, but luckily that’s not our business.

However, if you need help with designing your website or content development, we’ll recommend you ditch the training wheels as we know what we’re doing in that area. View our work and contact us today.

Interested in moving to the JAMstack? Let's talk.
Culture